On Sunday, 16th April 2017, Turkish citizens are to decide in a referendum whether Turkey’s parliamentary republic will be turned into a presidential system. Representatives of the Turkish Government have been campaigning in favour of this constitutional reform in Turkey, and have also organized rallies in European countries, including Germany and the Netherlands. Although absentee voter turnout lingered at less than 10% in previous elections, the large diaspora vote can still have a detrimental impact on the results.

Some of the rallies in Europe were cancelled due to security concerns. President Erdoğan immediately associated these reactions with mounting Islamophobia across Europe. He accused German Chancellor Angela Merkel of ‘Nazi methods’ and suggested that ‘the spirit of fascism’ was ‘running rampant in Europe’. His ‘Yes’ Campaign appeals to anti-European sentiments and nourishes the “Sevres Syndrome”, whereby Erdoğan and the AKP present themselves as the alternative to those who threaten Turkey’s citizens’ interests and rights.

Chancellor Merkel, who relies on a deal with Turkey to keep the number of refugees arriving in Germany at its current low, rebuked such crude comparisons rather mildly as ‘unjustifiable’ and condemned the instrumentation of the victims of the Nationalsocialist Regime. As national elections are coming up in September 2017, German political parties are worried of losing their voters to the right-wing populist Alternative für Deutschland (AfD), which successfully mobilized Islamophobic sentiments in 2016. Therefore, although anti-Muslim attitudes are indeed gaining in influence in Germany, initiatives to address Islamophobia hardly feature on the current Government’s political agenda or the election campaign. 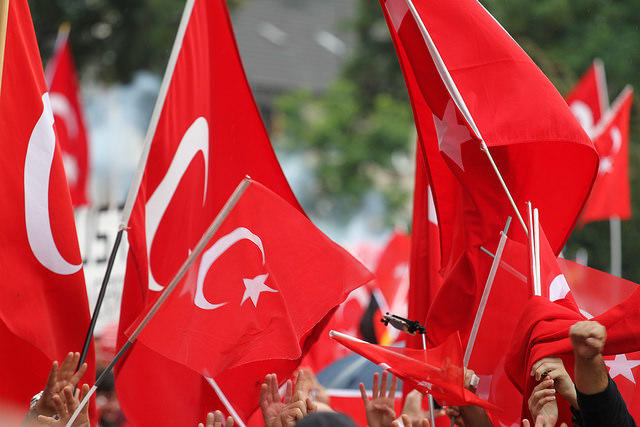 In this light, Erdoğan’s campaigning strategies are particularly problematic. They frame the struggle against anti-Muslim racism as a populist issue, antagonize European governments, and further obstruct their preparedness to engage with evidence for Islamophobia. Erdoğan’s populist attempts to mobilize electoral support thus not only instrumentalize the victims of the Nazi regime, but also those who experience Islamophobia. What is more, they seem cynical in the light of the constitutional changes the Turkish Government proposes, which further legitimatize ongoing human rights violations in Turkey. However, the Turkish referendum not only instrumentalizes, but also thwarts civil rights struggles in Europe and Turkey. Here is why:

The dark side of Germanys liberal refugee policy: Rising Islamophobia

Germany’s government, which received international praise for its liberal response to the humanitarian crisis at the European border, is now struggling with a domestic backlash against its decision to receive an additional 800,000 refugees from Syria. Public controversies on the settlement of refugees from majority Islamic countries have become particularly heated after the country experienced the first series of ISIL inspired terrorist attacks on German soil in July and December 2016. Generalizing and stigmatising assumptions about Islamic communities’ higher propensity to violence, political extremism or delinquency are prevalent in such debates. Anti-Muslim racist attitudes and practices have thus reached an unprecedented scale. Roughly 50 per cent of the population in Germany ‘feel like a stranger in their own country due to the high numbers of Muslims’. A significant proportion (about 20 per cent) are now also prepared to translate such views into political action. The Islamophobic party AfD parachuted into five regional parliaments in 2016, achieving between 12 and 24 per cent of the vote. According to official records, in 2016 there were 91 attacks directed at mosques, 970 attacks targeting refugee accommodation facilities, and 2,400 assaults aimed at individual refugees. Turkish and Muslim minority organisations, who have been raising concerns about hate crimes and discrimination for decades, are currently struggling even more to make their claims heard, as their relationship with German Government is tainted by Erdoğan’s interventions.

Turkey at yet another crossroads

After absentee voting rights were granted in 2012, Turkish election campaigns have been transnationalized and the diaspora has become more explicitly affected by Turkey’s domestic frictions.

Observers at home and abroad increasingly describe Turkey as an authoritarian and even totalitarian state. The first signs of a democratic reversal became notable during the Gezi protests in 2013, and an authoritarian style of politics slowly but surely crept into everyday institutional life in Turkey. The post-putsch period was marked by a more visible suppression and criminalization of political opposition movements. Supporters of the Gülen Movement, the nature of whose involvement in the coup attempt on July 15th 2016 remains vague, have been ‘cleansed’ from public institutions. Individuals associated with Gülen were labelled as ‘terrorists’, sacked from the public service, and many were arrested or held in custody. This ‘purge’ also targeted other oppositional groups, such as the Socialists, Alevis and Kurds. Also, a significant number of academics lost their positions upon signing the petition ‘Academics for Peace’. Last but not least, ‘terrorism’ charges are pressed against Kurdish politicians and activists, journalists, researchers and public intellectuals, including German-Turkish journalist Deniz Yücel, who is imprisoned in Turkey. Against this background, the pre-referendum populist rhetoric appears in a particularly ambiguous light. These trends give clear signals about what is to come should the suggested constitutional changes be implemented.

The constitutional reform constitutes a major breaking point in Turkish political history - no previous coup d’états or referenda have suggested comparably significant changes to the institutional architecture of the Turkish Republic. A ‘YES’ vote would mean that Turkey will be run by a one-man-rule. A ‘NO’ vote would mean that Turkey’s struggle for democracy is not over and its domestic instability, economic fragility and diplomatic isolation are likely to increase in the short run.

The winners and losers of Erdoğan’s grip on power

In summary, the Turkish referendum undermines rather than strengthens civil rights struggles in Germany and in Turkey. While there is significant evidence for a rise of Islamophobia in Germany, populist references to Nazi methods and fascism merely instrumentalize those subject to discrimination and hate crimes. Erdoğan’s populist campaign has repercussions for Turkish minority organisation’s attempts to challenge everyday experiences of Islamophobia in Europe, and is cynical towards members of the opposition who are subject to systematic repression and incarceration in Turkey. The potential winners of a ‘YES’ vote are not only Erdoğan’s regime, but also ultra-nationalist right-wing movements in Europe. Those most vulnerable to the result of the referendum are Turkish diaspora groups, who are stuck between a rock and a hard place, and of course anyone who disagrees with the authoritarian turn in Turkey.

The article was first published at PolicyBristol Hub.